Inclusive cycling- what can we learn from the Kingsmead Estate in Hackney?

The cycle lobby and bloggers have managed to establish that there is a simple link between road safety and levels of cycling. They suggest many would rush to cycle if only the road network ‘felt’ safe. They use the phrase ‘build it and they will come’.

They are able to sustain this argument because very few people cycle and little independent research has been undertaken. The research available has been undertaken by lobby groups in the main. And what research there is relies on surveys of attitude and sentiment. They ask respondents what they 'might do' rather than researching what they 'actually do'. In the words of Werner Brög, Social researcher and well know travel surveyor, “attitude is not behaviour”

The study I have undertaken is very different. It is an analysis of two communities in Hackney living cheek by jowl and using an identical local road network. The data is from the 2011 Census and as such is of unimpeachable quality. The analysis finds huge a difference in cycling levels between two communities that share identical access to the local road network. It debunks the cycle bloggers mantra of ‘build it and they will come’. The challenge for those advocating inclusive cycling is to understand why this is.

The analysis finds that comparing two adjacent census areas in Hackney one, ‘the leafy streets’, has the third highest (25.6%) cycling to work levels in Hackney. This compares to the adjacent ‘inter-war and 80s housing estate’ with the second lowest (3.6%). Both share an identical local road network. This is a seven-fold difference in cycling levels. The housing estate is the most bus dependent in the borough.

The map below is of the census areas which the Office of National Statistics (ONS) call Lower Level Super Output Areas (LSOAs). There are 144 such areas in Hackney. They will have between 400 and 1200 households each and are shown here with their ONS reference numbers.

The 144 LSOAs have vastly different travel to work by cycling levels. The highest being 27.5% down to 3.1% 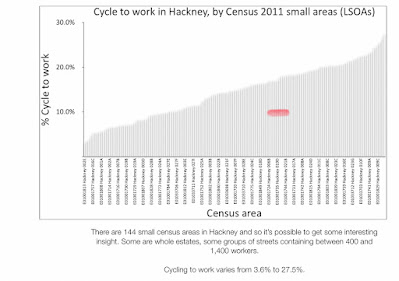 The first community live in Victorian terrace housing on leafy streets, just off the Homerton Road. There is little through traffic. Homerton Road is not one of London’s thundering roads. It is a  narrow primary route, the B112, often busy, but slow flowing road. It has a speed camera indicating past serious collisions. It is an important bus corridor. Access to the wider road network to the north and west, where most local transport objectives would be, is via Homerton Road or the wider traffic filtered area of Lower Clapton.

The second adjacent community lives on an inter-war and 80s housing estate that was a Hackney council estate and former timber factory, but is now managed by housing associations. It is set further back from the Homerton Road than the leafy streets and there is again little through traffic. In all other ways access to the local and wider road network is identical.

It’s clear that these two areas share the same road network. Both are within the red circle on the map below. 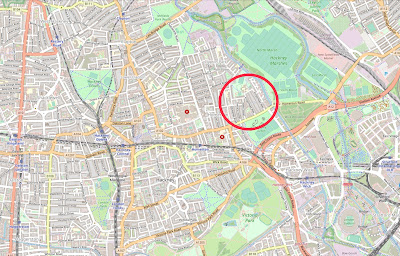 The inter-war and 80s housing estate
This photo represents most of the housing on the Kingsmead Estate.

Overall 35% have access to a car. 46% travel to work by bus, making it the most bus dependent community in Hackney. 4% cycle, the second lowest rate of any LSOA in Hackney.

Looking for an explanation

So what are the differences between these communities that so impacts cycling levels, beyond the housing form and ethnic group. The Census allows further analysis by cross tabulating several different characteristics within each LSOA.

If you plot cycling levels against % of white commuters it seems there is a correlation, though some of the highest % of white population has the lowest cycling rates. I think this is associated with the Charedi community in Stamford Hill. 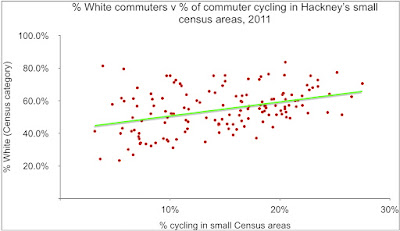 Here cycle to work levels are plotted against a Census socio-economic classification. 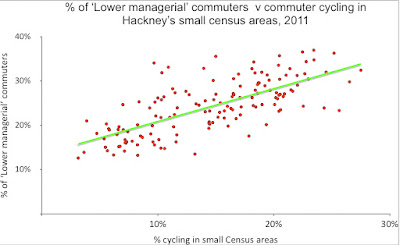 In a similar way to socio-economic classification, high cycle to work levels correlate with high percentages of professional occupations. 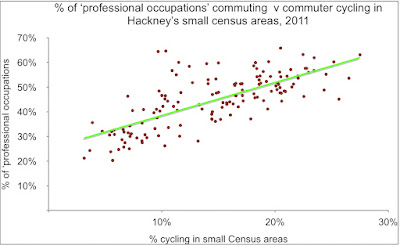 Unsurprisingly better off residents own cars and so given what we have learned above its not surprising that higher levels of cycling are associated with car ownership, though this will be depressed in Hackney due to its car free planning policies. 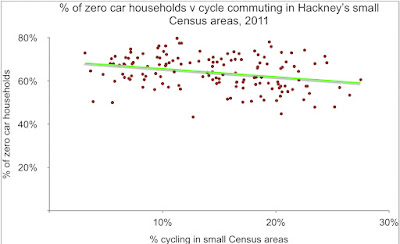 Conclusion
It is clear from this analysis that the central proposition of cycle lobbyists is not true. if politicians and sensible policy makers continue to unquestioningly follow their lead they will continue to fail and cycling will remain the preserve of those living on the leafy streets.
Posted by ICycleHackney at 22:45