Much has been made recently of conditions being made safe for cycling. However my experience has been that there is an unwillingness to discuss or take on board any views about what keeps cyclists safe other than the viewpoint that is currently fashionable - namely providing cycle lanes across London. The lengths to which some people will go to in order to suppress alternative views has surprised me. It includes people who would be, you’d have thought, in favour of free speech. These are my personal views.

Christian Wolmar journalist and London Cycling Campaign board member (Chair of the HR Committee), wrote twice last year to my employer complaining about comments on my personal Twitter account. Until now I have been unable to respond. In August he wrote:

“I am writing to you as a trustee of the London Cycling Campaign and one of the founders of Labour Cycles over concerns about the Twitter activities of one of your staff, Vincent Stops.”

His second complaint in October stated:

“After a period where Vincent was quieter and blocked me so I could not see his emails [tweets?], he is now at it again.. Here is his latest effort which is clearly nonsensical - cycle lanes are not inherently dangerous and I am sure this is not a view that [employer's name] would want to share.

I hope that you can take action on this...”

Below is the thread he complained about. My twitter thread challenges a rewriting of history by the local cycling group as to how Hackney became such a successful cycling borough. As an aside I say that cycle lanes were avoided because they are unsafe: 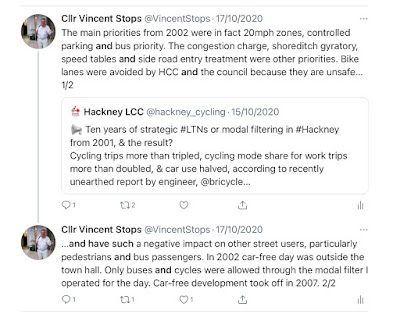 I’ve worked professionally, and as a councillor in Hackney, to promote more and safer cycling for over two decades. For two years I was the lead councillor for transport. Hackney is by far the best cycling borough in London. The Census in 2011 reported the highest rise in cycle to work of any local authority area in Great Britain. More residents cycle to work than drive.

There are cycle campaigners who think cycle lanes will get more people cycling safely, but there are others who have substantive concerns about the safety of cycle lanes. I am one of the latter - some cycle lanes are unsafe. I have made that case in public for many years, including on my Twitter account.

I’ve been on Twitter for a decade and have been debated and attacked for my views for years, and that’s fine. But what I want to put on the public record, and respond to, is the action of journalist and London Cycling Campaign board member, Mr. Wolmar, who made a direct complaint to my employer asking them to take action against me. The effect of this complaint was to stop me being able to express my views on these safety concerns, even in my own borough, in which I am an elected representative.

My twitter account made no reference to my then employer, nor has it ever made reference to my employer. The account is obviously of my own views. I didn’t get a chance to debate Mr. Wolmar on Twitter as he did not seek to engage with me, preferring, instead, to seek to suppress my views via my employer.

Christian Wolmar is a fairly high profile individual in transport circles and his complaint led to my consulting a solicitor, my trade union and invoking a grievance process with my employer - a public body that I had worked for, for 20 years and had hitherto been supportive of my public role.

Campaigning for cycle lanes and describing them as ‘protected’, ‘SafeSpace4Cycling’ or ‘segregated’, is easy.  It is much more difficult to actually design and implement lanes that provide space genuinely separate from motor vehicles. Often cycle lanes will stop short of the intersection. And it is at intersections where, overwhelmingly, collisions that injure cyclists occur. The ‘protection’ will often be only a dashed line or coloured surface. And, critically, the cycle lane means that cyclists are in the wrong position on the road from which to safely negotiate the intersection. Cycle lanes can make negotiating intersections less safe.

The collision types include:

You can read some proper analysis of cycle collisions commissioned by TfL here. And below is a slide from the Metropolitan Police service: 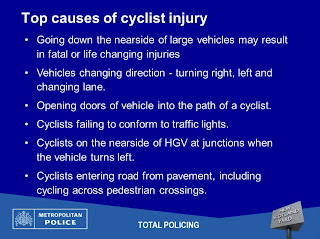 Cycle lanes may be fine on stretches of road where there are no intersections, but if there are intersections, bike lanes mean cycles pass side roads and travel through junctions, often at speed, too close to the kerb and on the inside of motor vehicles. This is the opposite strategy to that which cycle training teaches cyclists. Cycle training encourages cyclists to take a more central position so that one is visible to other road users. Cyclists should travel either in front of, or behind vehicles at intersections, and should not try to fit alongside each other competing for the same road-space at the junction or turn. 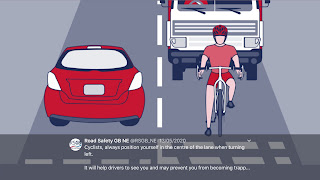 Cyclists travelling at speed down the inside of motor traffic at an intersection are out of the mind’s eye of the motorist or in a blind spot as the driver turns left and as both cyclist and driver compete for the same road-space. There is some proper research about ‘failure to see’ associated with turning collisions, commissioned by the EU here. 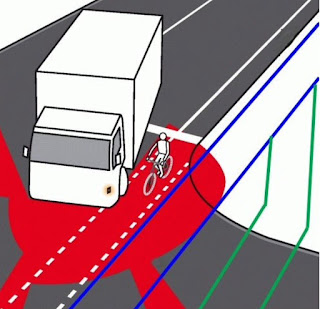 Below is an example from my own borough. The cycle lane merges with the carriageway. Cycles turning right compete with left turning motor vehicles for the same road-space.

Below, at the approach to Highbury Corner. A multi-million pound, cycle led, remodelling has designed in this situation. Cycles travelling straight ahead compete with left turning vehicles. 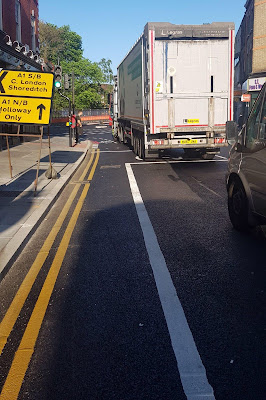 A similar situation arises as cycles pass side roads. Again the cycle is too close to the kerb and the motor vehicle will pass on the offside of the cycle and may fail to see as the driver turns left. Ordinarily, the cycle would be either in front of, or behind the motor vehicle that it is now alongside. Below is an example from one of the early Cycle Superhighways at Mile End. 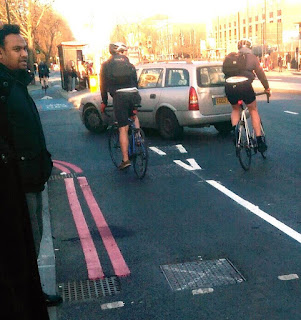 As I have said, none of this is new. For many years cycle trainers, cycling organisations, the police and highway authorities have tried to raise awareness of this danger. Below is an image from a Metropolitan Police slide. 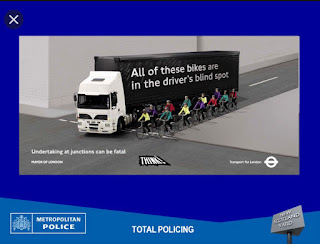 Pop-up cycle lanes introduced in response to the pandemic, have the same problem. Below an example on Green Lanes. 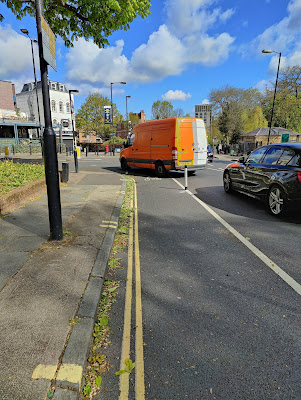 Mr. Wolmar also objected to the tweet below, in which I prompt readers to recognise the problem of turning right from a cycle lane on the far left of the carriageway, sometimes across two lanes. The video is from the DfT funded Bikeability training course for children. The video describes how cyclists are trained to safely turn right: https://www.youtube.com/watch?v=ikXGlqnCSWE 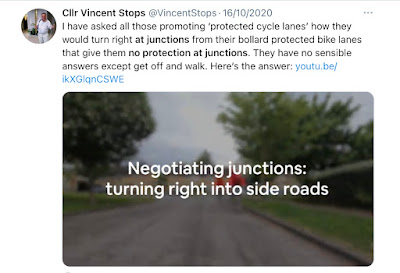 How much distance is needed to perform this manoeuvre is dependent on traffic conditions, but it can be quite a distance, particularly if crossing two lanes in busy traffic. Often this manoeuvre is not possible from the confines of a cycle lane and the only safe way to turn right is to dismount and become a pedestrian, which rather defeats the object of cycling as a respectable transport mode - it infantilises cycling.

Below, the photo of a ‘pop-up’ lane approaching Newington Green from the north, illustrates the problem. There is now no safe way of leaving the cycle lane in order to position oneself in the right turn area ahead without at some point dodging through the bollards whilst looking behind. 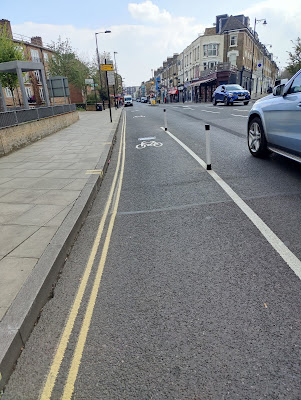 I have thought about this a lot. Social media is a fact of life. Everyone has a right to their views and should be able to express them. I was not politically restricted and should have the same rights as journalists and board members of cycle campaign groups. For politicians this is important and the electorate are entitled to know one’s views. It is surprising and disappointing a journalist would seek to suppress others’ personal views.

Installing ‘protected’ cycle infrastructure is not as simple as the cycle lobby and Mr. Wolmar would have you believe. The situations I have outlined above are well recognised safety concerns and they are not being dealt with. Whether the problems can in fact be ‘dealt with’ inclusively is debatable. Endless campaigning and harrying of those who have and express these concerns does not mean the concerns themselves will go away or become irrelevant.

Time will, of course tell, but I firmly believe the problems of cycle lanes for cyclists’ safety should be understood and debated, certainly not suppressed.
Further reading
If you want to read some proper research for yourself, there is a DfT commissioned assessment:

Cycling and Walking Safety: a rapid evidence assessment for the Department for Transport: https://assets.publishing.service.gov.uk/government/uploads/system/uploads/attachment_data/file/951097/Cycling_and_walking_safety_rapid_evidence_assessment.pdf

and a Danish study:

Bicycle Tracks and Lanes, a Before and After Study: https://www.researchgate.net/publication/237524182_Bicycle_Tracks_and_Lanes_a_Befoe-After_Study