They're not all hipsters. The demographics of cycling in Hackney 2

The cycle bloggers (and some academics and journalists) would have us believe that the fact that Hackney has succeeded in getting more residents to cycle than any other borough (by a long way) is down, in large part, to the demographics of the borough. They suggest it's a function of the number of 'hipsters' living in the borough. That this claim is made about one of the most diverse local authority areas in the UK is simply lazy and wrong.

In my view large numbers of people cycle in Hackney because Hackney has consistently applied policies (http://cycleandwalkhackney.blogspot.co.uk/2013_03_01_archive.html) that might work and are respectful of the other sustainable modes.

There is no Census category of 'hipster'. The interesting  demographic groups in the Census when considering cycling are ethnicity, socio-economic class and age (http://cycleandwalkhackney.blogspot.co.uk/2015_10_01_archive.html). Looking through the prism of these Census groupings, if the high levels of cycling were down to demographics alone, then Hackney would be characterised by higher numbers of white residents, more residents in lower managerial occupations and more residents aged 30 to 44 than other boroughs.

Below is an analysis of Census 2011 that charts these demographic aspects as they compare to two other boroughs. I have compared Hackney (15.4% cycle to work) against Islington (10.1% cycle to work) and Hammersmith and Fulham (5.1%). Islington has the next highest cycling rate in the Census and Hammersmith and Fulham (H&F) is higher than many boroughs and does well in realising its cycling potential. Below is a comparison of the above three Census categories by borough.

Is the population of Hackney characterised by those ethnicities who cycle most?

White British (and other white) categories cycle most in all three boroughs. The margin between these ethnic groups and others is considerable. Therefore if Hackney's high cycling level resulted from the demographics of the Borough, the population would be expected to have a higher proportion of white residents and fewer black residents, who cycle least.

In fact the data shows that Hackney has a much lower proportion of those ethnicities which are most likely to cycle.

Hackney has only 54.7% white residents (those most likely to cycle) compared to Islington at 68.2% and H&F at 68.1%. It has a much greater proportion of the ethnicity least likely to cycle. 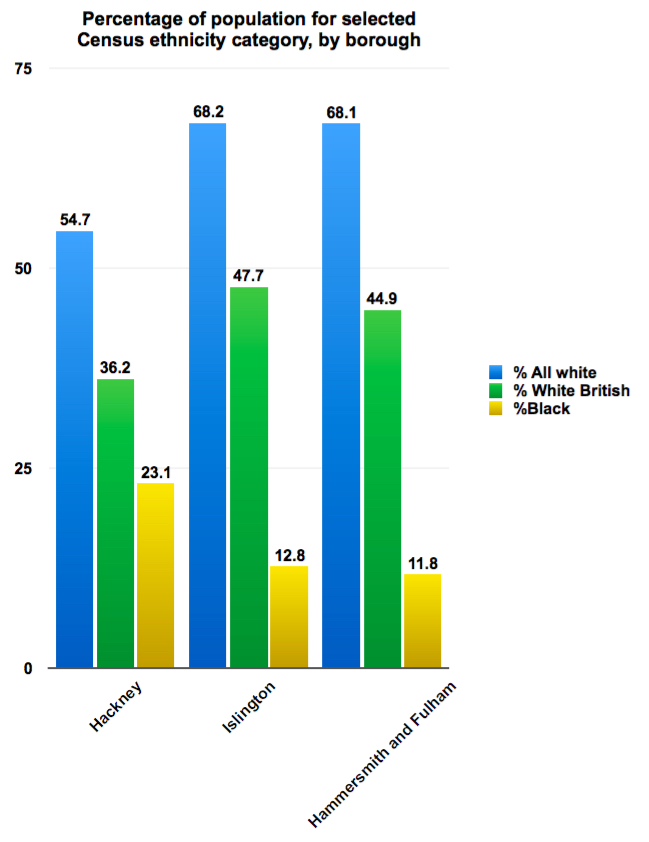 Does Hackney have a greater number in the socio-economic class that cycles proportionately more?

People in 'lower managerial, administrative and professional' occupations are the group who cycle most in all three boroughs. If Hackney's high cycling level resulted from the Borough demographics it would tend to suggest that the Borough had higher numbers of residents employed in these jobs.

A comparison of this Census category by borough shows that  Hackney has a lower proportion of the socio-economic classes most likely to cycle than the other two Boroughs.

Only 24.7% of its residents are in the socio-economic class 'lower managerial' compared to Islington at 25.7% and H&F at 27.9%. It also has a greater proportion of residents in 'routine occupations' which is the group that is least likely to cycle. 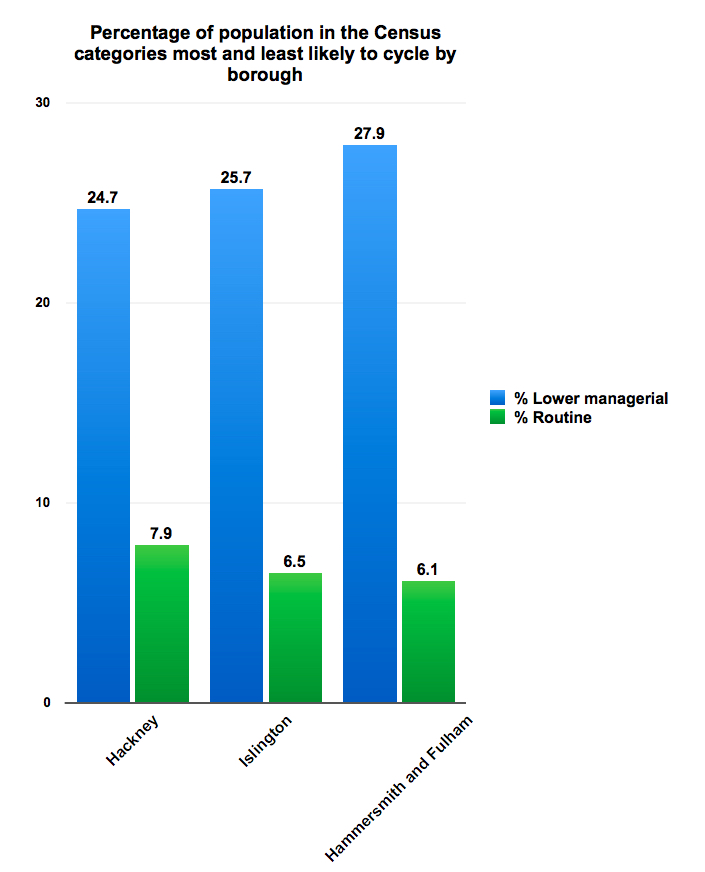 Does Hackney have a greater number of those in the age range that cycles most?

In all three boroughs people aged between 30 and 44 cycle significantly more than any other age range. If Hackney's high cycling level was a function of demographics one would expect Hackney to have more residents in this age band than the other two comparator Boroughs.

Below is a comparison of the age range that has the highest proportions cycling by borough. It shows that all three Boroughs have about the same proportion of those ages most likely to cycle. 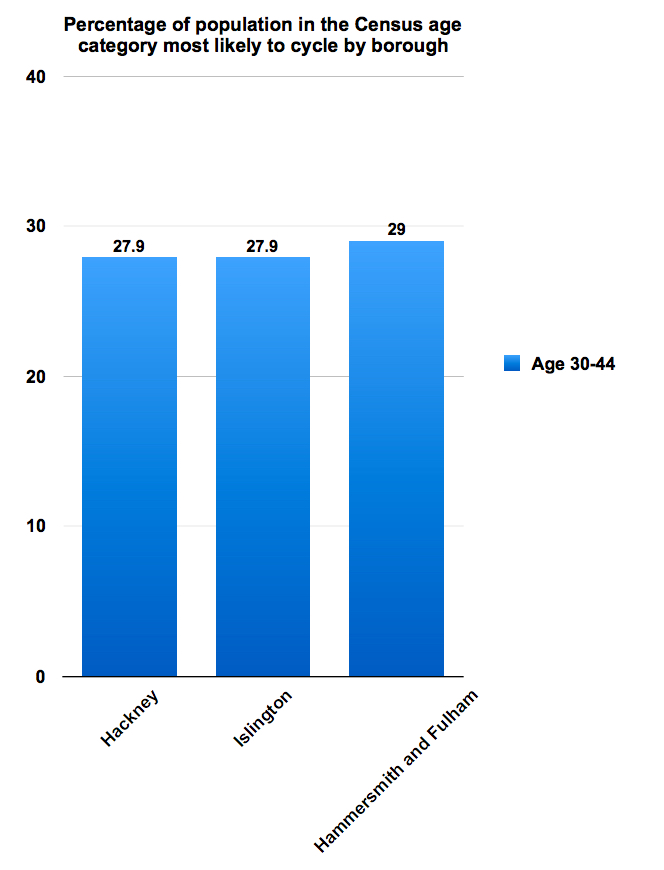 This demonstrates that back when the Census was taken and gentrification less evident there was a much higher cycling rate in Hackney. And it is not simply a function of its demography. The high levels of cycling have been undoubtedly influenced by the policies of the borough. Policies that have made Hackney a better place to cycle, restrained private motoring, and positively encouraged cycling.

Some people seem absolutely determined to belittle and undermine what Hackney has achieved. When you posit answers to what they propose in relation to demographics (high levels of cycling are caused by hipsters), they shift ground to say that the reason for so much cycling must be the geography, topography or lack of a tube. None of those can account for the fact that Hackney:
- has the highest level of cycling in London
- AND has increased the rate more that any other in the UK, (by 125% between Census 2001 and 2011)

Comparisons with other high performing boroughs shows this. 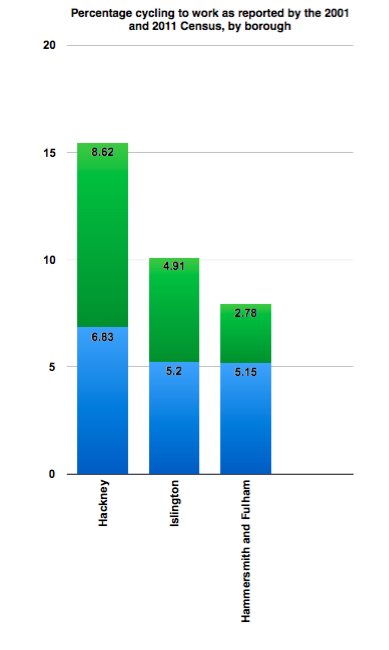