Who cycles? The demographics of cycling in Hackney

Guardian journalists are publicly debating the issue of socio-economic class, culture and the propensity to cycle. This is good as understanding these things should have a beneficial impact on policy development.

The cycle bloggers (and some academics and journalists) would have us believe that the matter of those who do and do not cycle is one-dimensional. They say that the main thing that prevents people from cycling is fear of road traffic linked to feelings of personal safety. However the picture below suggests that the picture is more complicated.

Below are some of the statistics relating to cycling. The information comes from three sources. Firstly Census 2011. The Census is a good data source because it cannot be manipulated, participation is mandatory and, unlike many cycling surveys that are promulgated, it shows how people actually travel, not how they 'say' they might travel. The other authoritative surveys are Transport for London's Travel Demand Survey and Transport for London's analysis of cycling potential (the number of journeys that might be cycled).

Note also that there is academic research which suggests that Census figures are a good proxy for cycling statistics generally.

Census 2011 found that 7.2% of commuters in inner London cycled to work compared to 2.3% overall. Hackney has the highest level of cycling commuters of any London borough, double the inner London average, at 15.4% and much higher than the next highest borough, Islington, at 10.1%.


Transport for London's survey, the London Travel Demand Survey reports 7% of all journeys (not just commuting journeys) are undertaken by cycle in Hackney. TfL's analysis of cycling potential indicates that Hackney has been particularly effective in realising its' cycling potential with 24% of cycleable journeys actually being cycled, almost 10% higher than the next borough (Hammersmith and Fulham).

However, if you live in Harrow you almost certainly won't cycle to work. Only 869 (or 0.8%) of residents do so. 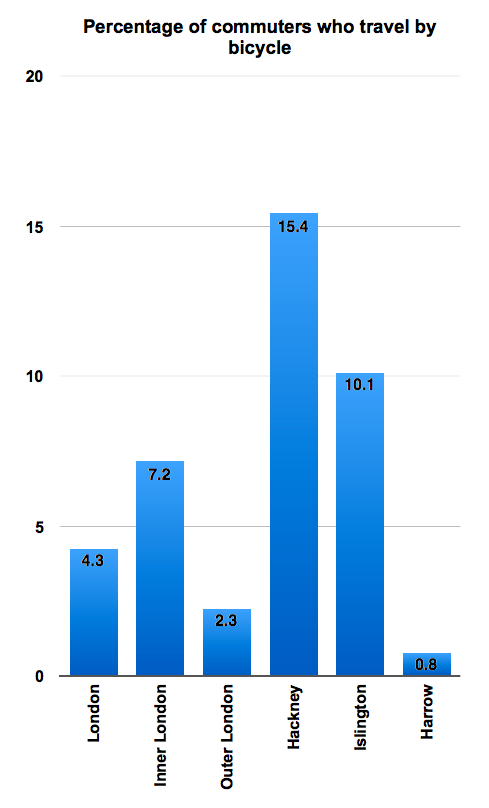 If you cycle in Hackney you'll probably be white British


Further analysis of Census 2011 shows the importance of culture and socio-economic class.  21.6% of white British commuters cycle, 4.3% of black commuters do. This means 61% of those residents of Hackney who cycle to work are white British (if 'other white' Census categories are included, the figure rises to 85%).

Note also from the graph below that the Census category of Black/African/Caribbean/Black British people are major users of the bus. 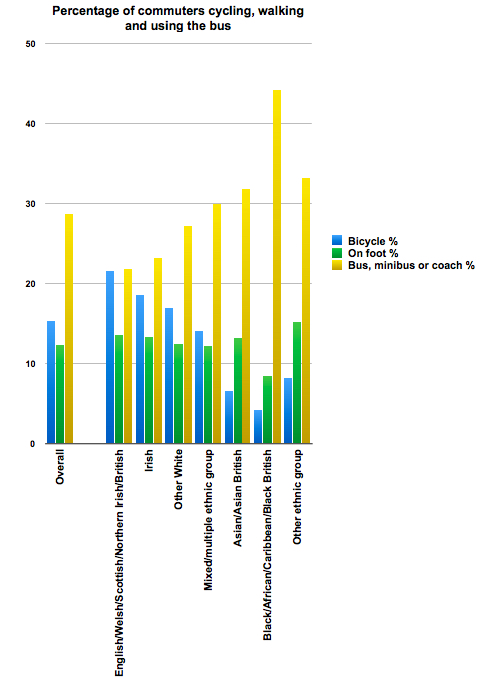 The Census reports socio-economic classifications against method of travel to work. Higher professional occupations are hugely over-represented in the cycling figures. 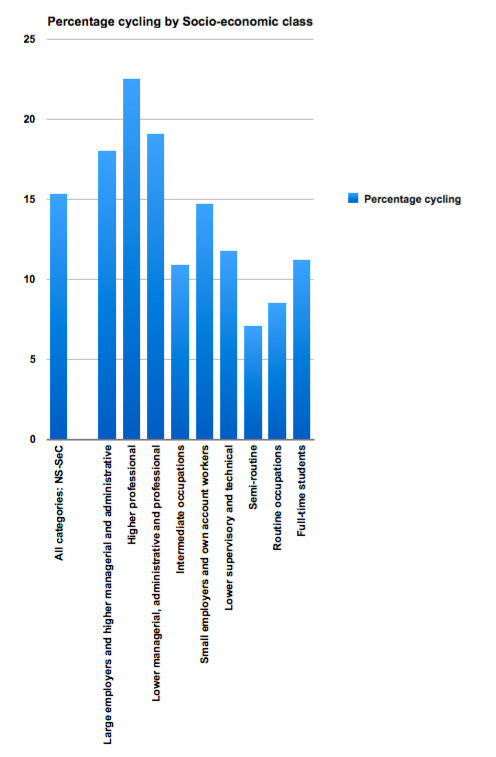 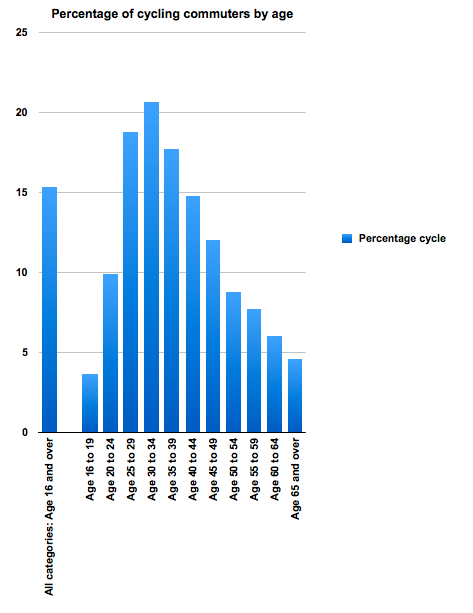 If you cycle in Hackney you'll probably be male, but are more likely to be female than in any other London borough

In countries where cycling is much more prevalent there is close to parity in cycling rates between the genders. Although it is some way off parity, Hackney is significantly better than the inner London average.

Cambridge in particular does well both in terms of levels of cycling and gender balance.

If you cycle in London you will probably live in inner London. If you are a Hackney resident you will probably be white; have a managerial, administrative or professional occupation; and be a 25 to 34 year old male. 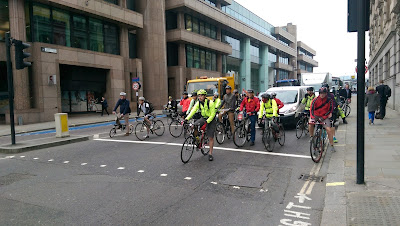 The absolute figures for ethnicity are telling: of the 16,411 who cycle to work in Hackney the Office of National Statistics classify 13,875 (85%) as 'White'. This is in the context of a resident population of 246,270 in one of the most diverse boroughs in the UK with a walking share of all trips at 37%; bus trips at 26% (the highest in the UK) and cycle trips of 7%.

The cycle bloggers would have us believe that everyone wants to cycle and the single thing that would make people cycle would be to introduce separated cycle tracks, bus stop bypasses and associated junction treatments to our streets. They say this course of action should be pursued, whatever the cost and regardless of detriment to others (in particular people walking and those using the bus). The argument is that it is largely fear of motor vehicles that puts non-cyclists off from cycling.

This cannot be true. Is the proposition that fear is behind the five fold difference in cycling rates of 21% to 4.3% of two different ethnic groups really plausible? Similarly can anyone truly believe that it is fear of motor traffic alone that means that one socio-economic group cycles at a rate of 22.5% and another at 7.1%? The differing rates between different age groups are clearly also worthy of more analysis and consideration.

Although road safety fears will be a reason why people choose not to cycle it simply cannot be the only reason. More sophistication is needed if the right mix of policies are to be pursued so as to genuinely encourage a broader range of people to cycle. The vogue for segregated tracks on relatively narrow roads seems to additionally privilege an already privileged group - by giving this group dedicated street space. This space is given to the detriment of walkers and bus users, and walking and buses are the most space efficient modes of transport. After all, not all may wish to cycle and many may simply want to get on the bus and read a book!