Dr Rachel Aldred has just published her latest blog. In which she states:


"Each year, Hackney consistently has more cyclist than pedestrian casualties."

But is this true?

The graph below shows cycle and pedestrian fatalities since 2000. 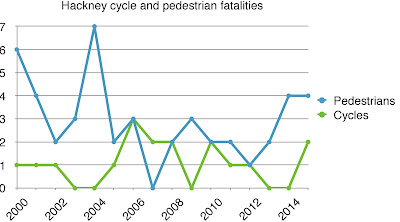 The second graph shows cycle and pedestrian serious injuries since 2000. 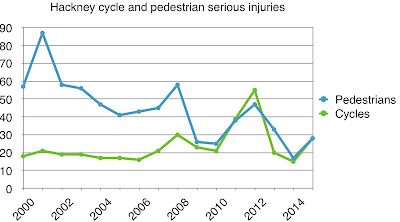 And finally the graph of cycle and pedestrian slight injuries, those not needing hospital treatment. 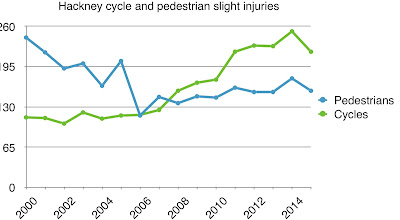 From these graphs it is clear that Dr Aldred's comment that Hackney consistently has more cycling than pedestrian casualties isn't true.

It is even less the case if one does as cycle campaigners suggest and one were able to consider casualties per mile cycled, because there is much more cycling now than there was in 2000.

The data show that:
Every injury is a personal tragedy. But If one were interested in the truth, rather than being determined to frame cycling as a dangerous activity, one would say that Hackney council has been successful in its borough-wide approach to cycle and pedestrian road safety since 2000. It is a testament to all those involved and should not be undermined. The rate of cycle fatalities and serious injuries is reducing. Slight injuries to cyclists are increasing, but below the rate of increase in cycling.

For the record he graph below shows Hackney killed and serious injuries for all modes on Hackney's streets and in total. 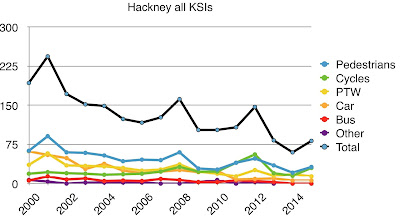