It is the case that on a ‘per kilometre’ cycled basis fatalities are lower.  However, in absolute numbers, the Netherlands has twice the number of cycling fatalities than Great Britain, but with a population one quarter ours. I have tried to bring this to people’s attention because it’s important. But I was effectively silenced. The person who prompted the suppression of my views would, you’d have thought, been in favour of free speech and intellectually interested in alternative points of view.

Christian Wolmar, journalist, and London Cycling Campaign board member (Chair of the HR Committee), wrote twice last year to my employer complaining about comments on my personal Twitter account. Until now I have been unable to respond. In August he wrote:

“I have been concerned about his Twitter posts for some time but the final trigger which has prompted this email is a recent post in which he used statistics in a completely dishonest way. In this post, Mr Stops argues that to ‘Go Dutch’ risks an increase in cycling fatalities because that is what has happened in the Netherlands. This is a misuse of statistics on a Trumpian scale. Of course there are more fatalities in the Netherlands because cycling levels are many times greater than in the UK. The relevant statistic, as Mr Stops must know, is the rate of deaths per million miles cycled, which is far lower than ours. This is a plain misuse of statistics, using a highly partial selection in order to fit in with Mr Stops’ views.”

His complaint went on:

“I would be very interested to know if this is something that is allowed under your employment terms and, if not, whether you will ask Mr Stops to desist from making these attacks.”

Below is the thread he complained about. My tweet makes the point that the absolute number of cycling fatalities in the Netherlands in 2018 was 228 and in Great Britain 99. And that the Netherlands has a population a quarter the size of the GB. I highlight this because it is a big deal. People ought  to think about the consequences of ‘going Dutch’. I believe we should do much better than the Dutch, or there will be many more cycling fatalities on our roads. 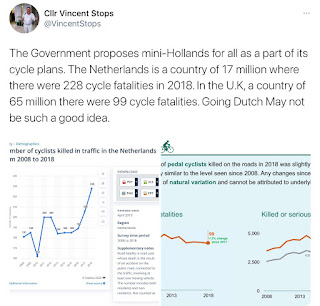 The best source of the data I know is the EU sponsored European Transport Safety Council’s publication, page 25: How safe is  walking and cycling in Europe? 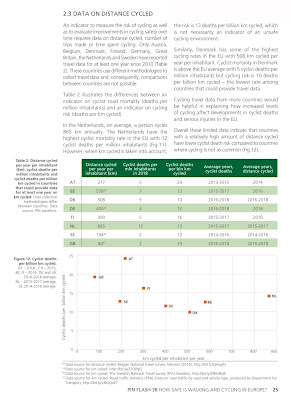 The table also shows the cycling fatalities per million inhabitants is 12 in the Netherlands compared to 2 in Great Britain.

Going Dutch may not be such a good idea. To emulate ‘Go Dutch’ may well result in many more cycling casualties on our roads. We need to do better than the Dutch. This is the debate Mr Wolmar wanted to close down.

As background, the latest fatality data for all modes in both countries is available for 2019. Tackling pedestrian and motorcycling casualties, alongside cycling and child casualties on the roads is where the focus of road safety should be in my view and, until recently, was.

The Netherlands recently published figures for 2020 that show there were an even greater number of cycle fatalities in 2020. 229 cyclists lost their lives using Netherlands cycling infrastructure, the highest number of cycling deaths in 25 years: https://www.cbs.nl/en-gb/news/2021/15/610-traffic-deaths-in-2020