One of the things one picks up early from working in transport and talking to older and disabled people is that they fear cycles on the pavement. And so for many of those working on streets policy it has been shocking to see TfL and other highway authorities divert cycles through bus passenger waiting areas at bus stops. This has been reinforced for me when working alongside disability groups who complained of being ignored and at a Hackney council scrutiny committee when the RNIB told us blind people could not use these stops. 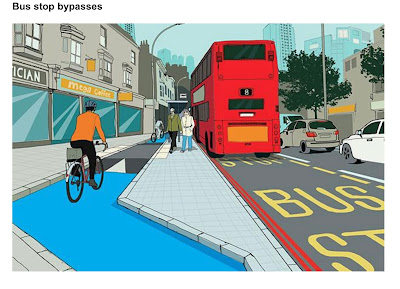 And to recently read that TfL’s own internal disability advisory group described one bus stop design as a ‘turd’, is more shocking still:

However, there was also strong agreement that this design was, in essence, ‘polishing a turd’ i.e. it was still a turd, but a better one.

The introduction of accessible buses and bus stops has been a key task of the last 30 years. This is because the bus is the most inclusive and affordable public transport, operating 24/7 across the whole of greater London. Any notion of social justice in transport starts with improving access to public transport, primarily the bus.

We know there will be any number of bus passengers at these stops that are either elderly or disabled. There will also be other passengers not in these groups, for example those pushing a buggy or alighting with multiple small and energetic children. All have benefited from legislation and action to improve access to the bus.

How did we get into a situation where £100s millions has been spent over decades on accessible buses and £10s millions to provide accessible stops? How have public bodies, such as TfL, been able to avoid their legal duty to older and disabled people to ‘advance equality’? Are they in fact allowed to disadvantage disabled people who need to access the bus from the pavement in such a manner?

TfL describes the negative impact of their bus stop designs on disabled people in its equalities assessment. And so they understand the problem. They say:

This may increase the potential of interactions between cyclists and pedestrians. Pedestrians who have cognitive, mobility and sensory impairments are more likely to suffer from the negative effects of the increased degree of cyclist / pedestrian interaction. In addition, the amount of manoeuvrability for wheelchair users may be more restricted to accommodate the cycle track as there may be less space.

And on older people:

This may increase the potential of interactions between cyclists and pedestrians. Pedestrians who are over 65 and have restricted mobility or are blind / partially sighted are more susceptible to potential cyclist / pedestrian interaction.

Which all means that older and blind people along with, say, autistic children, and those that use wheelchairs will be put off using the bus. And in some cases may well be injured because cycles, travelling at speed*, are diverted through bus stops. 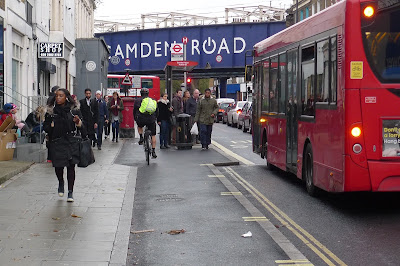 Understanding how this has been possible requires an understanding of the history of equalities legislation. But in short the 1995 Disability Discrimination Act  that focussed entirely on disability, was repealed and replaced by the Equalities Act 2010 with 9 ‘protected characteristics’.

And this has meant that instead of worrying about the access needs of older and disabled people getting on and off the bus, TfL has been able to mix it up in their assessment and balance off the needs of any group that is under represented in the demographics of cycling. Thus, TfL say:

there are benefits for all ages:

It is anticipated that introducing a segregated cycle track will encourage cycling growth among people of a wider age range;

Cycles can act as a mobility aid for a small number of those who find walking difficult or cannot walk at all. Some people with disabilities ride standard bicycles; others use one of the many types of non-standard bicycle available such as tandems, tricycles, hand cycles or electric bikes;

With women making up over 50% of Hackney’s population, improvements to the infrastructure in the area to create a feeling of safety is likely to achieve higher levels of active travel for women;

there are benefits for ethnic minority communities:

This forms part of a series of measures to help open up cycling as a viable mode of transport to a larger number and wider range of people. BAME groups are typically under-represented in cycling at less than 7% of all cyclists in London, with the lack of facilities and safety concerns associated with traffic key barriers to cycling for BAME groups according to a TfL report;

those having undertaken gender reassignment benefit:

Implementing these measures is likely to deter people from committing crime, which may have a positive impact on people that have undertaken gender reassignment;

And so it goes on.

TfL and other highway authorities have, in effect, said that they can now set aside the access needs of older and disabled people in favour of all of those that might cycle if cycle lanes were routed onto the pavement and through bus stops (None of which is substantiated).

So legislation designed to advance the needs of all equality groups is now disadvantaging those with disabilities and it is no longer the case that disabled people’s access to bus services is a priority. 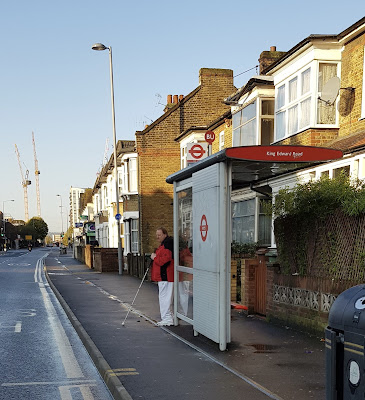 This can’t be right!